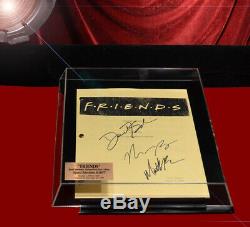 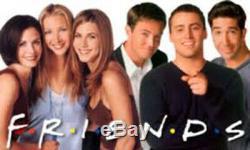 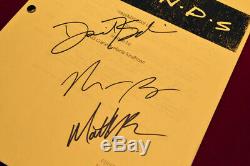 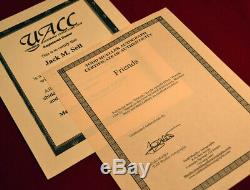 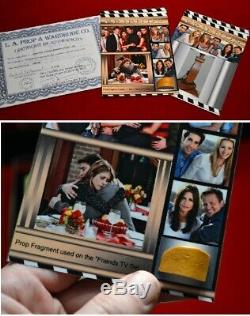 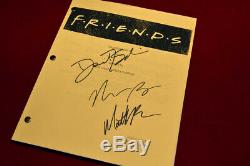 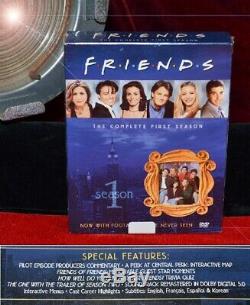 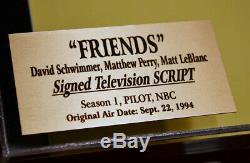 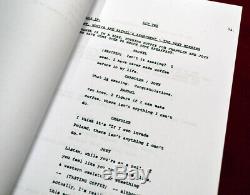 Certificate of Authenticity (COA) for Autographs from world renowned TODD MUELLER AUTOGRAPHS and guaranteed genuine for life by UACC Registered Dealer #228. An actual piece of a PROP LAMP from the "Friends" Set on Stage 24, Warner Brothers Burbank Studios. As a TV & Movie DIRECTOR and a lifetime member of the Director's Guild of America, D.

Sell is offering some rare props & collectibles from his personal collection from some great television & motion pictures, including "STAR WARS, " "RESIDENT EVIL, " APOLLO 13, " "STAR TREK, " "AMERICAN PIE, " "DIRTY DANCING, " "E. ", "WARM BODIES, " "CASINO ROYALE, " "bruno, " "GONE WITH THE WIND, " "HANNIBAL, " "BATMAN, " "IT'S A WONDERFUL LIFE, " "SUPERMAN, " "GHOST, " "NATIONAL TREASURE, " "SKYFALL, " "SPIDER-MAN" & "PIRATES of the CARIBBEAN + dozens of other Films & Television shows, many destined to become Classics that will live on for millions of viewers for years to come. This very RARE AUTOGRAPHED SCRIPT of "FRIENDS" was signed by 3 of the show's STARS.. DAVID SCHWIMMER, MATTHEW PERRY, MATT LeBLANC.

This full shooting script is signed on the cover and is displayed inside this beautiful clear & black glossy acrylic DISPLAY CASE.. All signed in Black Ink Pen on the cover of this PILOT SCRIPT.

Of course, you receive the Original Certificate of Authenticity from world renowned Todd Mueller Autographs that is guaranteed by Director Jack M. Sell, lifetime member of the D. (Director's Guild of America) + UACC Registered Dealer #228.

The overall Case measures approximately 14" x 12" and can be opened or closed if desired... It does have a small black piece of the stand that has been repaired. Can't really see it unless you look for it under the script!

And nicely mounted with this brass plaque that reads. This autographs are NOT A REPRINT... They are all ORIGINAL & GUARANTEED GENUINE FOR LIFE. You also receive DVD sealed boxed SET of Season One of the "FRIENDS".

This set also includes great extra footage, interviews & more.. You also receive this actual piece of a PROP LAMP that came from the "Friends" Set. On Stage 24, Warner Brothers Burbank Studios. The Script Autograph CASE is ready to display on your table or shelf or in your media room or give as a gift to the "FRIENDS" fan in your family! The condition of this SCRIPT is in good condition...

You can read & follow along with your autographed SCRIPT as you watch this great series... This is the PILOT, the First Show! I still remember this last scene from the first episode when Ross thinks he got Carol pregnant... Cool to see it in type before it was filmed! This Autographed SCRIPT is the 1st Show PILOT episode..

Friends is an American sitcom television series, created by David Crane and Marta Kauffman, which aired on NBC from September 22, 1994, to May 6, 2004, lasting ten seasons. With an ensemble cast starring Jennifer Aniston, Courteney Cox, Lisa Kudrow, Matt LeBlanc, Matthew Perry and David Schwimmer, the show revolves around six friends in their 20s and 30s who live in Manhattan, New York City. The series was produced by Bright/Kauffman/Crane Productions, in association with Warner Bros. The original executive producers were Kevin S. Kauffman and Crane began developing Friends under the title Insomnia Cafe between November and December 1993.

They presented the idea to Bright, and together they pitched a seven-page treatment of the show to NBC. After several script rewrites and changes, including title changes to Six of One and Friends Like Us , the series was finally named Friends.

Filming took place at Warner Bros. All ten seasons of Friends ranked within the top ten of the final television season ratings; it ultimately reached the number-one spot in its eighth season. The series finale aired on May 6, 2004, and was watched by around 52.5 million American viewers, making it the fifth most-watched series finale in television history, and the most-watched television episode of the 2000s. Friends received acclaim throughout its run, becoming one of the most popular television shows of all time.

The series was nominated for 62 Primetime Emmy Awards, winning the Outstanding Comedy Series award in 2002 for its eighth season. TV Guide's 50 Greatest TV Shows of All Time, and no.

7 on Empire magazine's The 50 Greatest TV Shows of All Time. In 1997, the episode "The One with the Prom Video" was ranked 100 on TV Guides 100 Greatest Episodes of All-Time.

The original AUTOGRAPHED SCRIPT has been stored in an acid free case in a smoke free & pet free environment since being acquired. Check out our other auctions for more TV & Movie Collections that include wardrobes, props & autographs. Sell is a Registered Dealer with the U. (RD#228) & Dealer with IADA.

We are proud that some of our memorabilia is on display in the SMITHSONIAN, Washington, D. If this autograph is declared not to be authentic, we may ask the purchaser to supply the full written opinion of one competent authority acceptable to us.

Belfast PRAISE: Wonderful Ebayer & with genuine COA's too! It is the most professional-quality work I've ever seen, absolutely worth every penny. I can't thank you enough for helping me to realize my dream of being able to hold in my hand something that was actually a part of this movie.

I even cried a little when I touched the prop for the first time. Thank you from the bottom of my heart. I hope to do business with you again some day! AND, peggie701 wrote us this nice letter.

JACK, GOT YOUR PACKAGE TODAY! I WAS VERY IMPRESSED AT THE WAY YOU PUT ALL THE PROPS TOGETHER. I PUT YOU IN ONE OF MY FAVORITES!

AND, THANKS TO THE OTHER 10,000 GREAT EBAYERS WE'VE HAD THE HONOR OF WORKING WITH FOR OVER 20 YEARS.... WE LOOK FORWARD TO MEETING MANY MORE GREAT EBAYERS IN THE FUTURE FROM ALL OVER THE WORLD. This very Rare "FRIENDS" collection includes a Genuine RARE Autographed SCRIPT signed by it's stars DAVID SCHWIMMER, MATTHEW PERRY, MATT LeBLANC displayed in a Large Acrylic DISPLAY Case with engraved Plaque, Sealed Boxed DVD Set of "FRIENDS" (Season ONE), an actual piece of a PROP LAMP from the "Friends" Set & Certificate of Authenticity (COA) for Autographs guaranteed genuine for life by UACC Registered Dealer #228.

A GREAT piece of "FRIENDS" History.... A real "One of a Kind" Find & Conversation Pieces.... Movie & Television Props & Autographs can make for a good investment as well! Check out our other auctions for more great movie & television shows PROPS, AUTOGRAPHS & COSTUMES! Imagine giving this great collection to the Fan in your family or just keeping it for yourself for what could be a good investment!

A GREAT COLLECTION from this award-winning NBC Television Series, FRIENDS. The item "Original FRIENDS Signed SCRIPT, Cast x3 Autograph, COA UACC Display CASE DVD Set" is in sale since Thursday, March 19, 2020. This item is in the category "Entertainment Memorabilia\Autographs-Original\Television". The seller is "jackmsell" and is located in New Port Richey, Florida.

This item can be shipped worldwide.