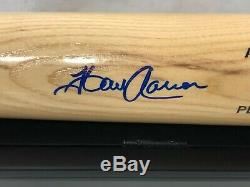 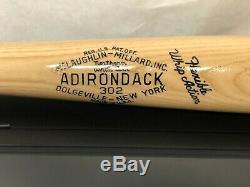 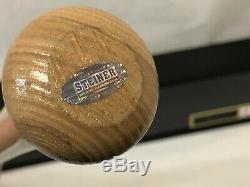 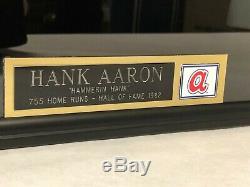 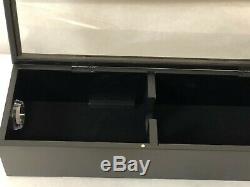 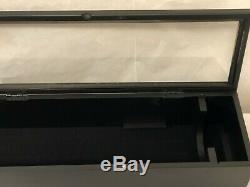 Hank Aaron AUTOGRAPHED Adirondack Personal Game Model Bat w/Display Case, Authenticated by Steiner Sports! Personally signed by Hammerin' Hank in blue sharpie across the barrel, the bat comes with a custom-designed black display case and bears the Steiner Sports Memorabilia authentication hologram CoA sticker on the handle. The bat comes with a custom-designed black wood display case with a glass front. A brass plaque is fixed to the front bearing the old-school Atlanta Braves logo, his name in large bold type, the Hammerin' Hank nickname and his career highlights: 755 Home runs and Hall of Fame 1982. Aaron played 21 seasons for the Milwaukee/Atlanta Braves in the National League (NL) and two seasons for the Milwaukee Brewers in the American League (AL), from 1954 through 1976. Aaron held the MLB record for career home runs for 33 years, and he still holds several MLB offensive records. He hit 24 or more home runs every year from 1955 through 1973, and is one of only two players to hit 30 or more home runs in a season at least fifteen times. In 1999, The Sporting News ranked Aaron fifth on its "100 Greatest Baseball Players" list. Aaron was born and raised in and around Mobile, Alabama. Aaron had seven siblings, including Tommie Aaron, who later played in MLB with him. He appeared briefly in the Negro American League and in minor league baseball before starting his major league career. By his final MLB season, Aaron was the last Negro league baseball player on a major league roster. Aaron played the vast majority of his MLB games in right field, though he appeared at several other infield and outfield positions. In his last two seasons, he was primarily a designated hitter. Aaron was an NL All-Star for 20 seasons and an AL All-Star for 1 season, from 1955 through 1975. Aaron holds the record for the most seasons as an All-Star and the most All-Star Game selections (25), and is tied with Willie Mays and Stan Musial for the most All-Star Games played (24). He was a Gold Glove winner for three seasons. In 1957, he was the NL Most Valuable Player (MVP) when the Milwaukee Braves won the World Series. He won the NL Player of the Month award in May 1958 and June 1967. Aaron holds the MLB records for the most career runs batted in (RBI) (2,297), extra base hits (1,477), and total bases (6,856). Aaron is also in the top five for career hits (3,771) and runs (2,174). He is one of only four players to have at least seventeen seasons with 150 or more hits. [4] Aaron is in second place in home runs (755) and at-bats (12,364), and in third place in games played (3,298). At the time of his retirement, Aaron held most of the game's key career power hitting records. 3× Gold Glove Award (19581960). 2× NL batting champion (1956, 1959).

Steiner Sports Memorabilia, the leading producer of authentic hand-signed collectibles, further certify the autograph is true and authentic! The bat is signed in bold. Sharpie, the signature is clear and easy to read.

We give you the information that is supplied to us by our vendors. We take item photos at time of sale unless noted. We are not experts in all the items we offer so please look over the photos carefully. If it's not in the photos, it's not included (even if you think it should be).

This is not a retail store. If there is a problem, we can and will work together to resolve the problem and always try to work with our customers to find a resolution and we will make every attempt possible to resolve the issue. We allow up to 48 hours to pay for auctions. Edrop is the Midwests premier online drop-off store.

We make it easy for anyone to sell their things on online. We professionally photograph their items and list them on one or more of our multiple online marketplaces. Edop, You Drop It Off, We Sell It Online! The item "Hank Aaron AUTOGRAPHED Adirondack Personal Game Model Bat withDisplay Case & CoA" is in sale since Tuesday, March 3, 2020.

This item is in the category "Sports Mem, Cards & Fan Shop\Autographs-Original\Baseball-MLB\Bats". The seller is "e-drop" and is located in Wichita, Kansas. This item can be shipped worldwide.